In this article, we provide some background on concentrating solar power (CSP), discuss the criteria for determining whether CSP might be a good fit for your company or organization, and provide some illustrative project cashflow examples using the FOCUS, our highly efficient and cost effective CSP solution.

Some Background on CSP

CSP is a technology for collecting the solar radiation that freely falls on the Earth in vast quantities every day. At sea level, on a clear day, approximately 930 watts per square meter of solar energy arrives at the Earth’s surface. By using efficient collection methods, this energy can be harnessed for useful applications, such creating steam or hot water for industrial processes, space heating, generating electricity, or other applications such as desalination of seawater. CSP has gone through periods of significant interest, typically when energy prices spike due to geopolitical upheaval, such as in the 1970s and today. During the late 2000s and early 2010s, there was a major surge in interest in CSP as concern about climate change mounted. Many large CSP projects were launched, generally focused on using solar heat to generate electricity via steam turbines. Ultimately the economics of these projects have been challenged due in some cases to technical problems, and as PV prices have fallen precipitously.

However, there is another way to use CSP – to use the collected solar energy for direct heat applications, avoiding the huge energy losses associated with conversion into electricity. Indeed, using numbers provided by NREL, we estimate that up to 6% of all U.S. energy consumption could be met using solar heat for industrial process heat applications.

Historically, the parabolic dish has been perceived as complex to make, and costly. However, in designing and manufacturing the FOCUS, our solar thermal parabolic dish, we have shown that the complexity, such as it exists, can be engineered out through design innovation and adoption of modern industrial production methods. Also, by adopting a simple thermal receiver with no moving parts, we sidestep another major challenge associated with past parabolic dish approaches which have used unreliable and heavy Stirling engines at the receiver.

The NREL analysis referenced above limited its scope to only mature solar technologies, and identified the parabolic trough as the highest potential solar technology for meeting the thermal energy needs of industrial users. Since the FOCUS can serve as a drop-in replacement for parabolic trough, offering the same temperature range and utilizing the same thermal fluids and balance of plant equipment, just with far higher energy collection efficiency, it’s clear that the FOCUS could also serve this market need.

Additionally, using solar heat to displace CO2 emissions is extremely space-efficient. One acre of FOCUS parabolic dish concentrators located almost anywhere in the U.S. will deliver annual CO2 emissions avoidance equivalent to the CO2 sequestration impact of multiple tens or even hundreds of acres of forest. This is a higher CO2 avoidance impact per acre than that of any other solar technology, due to the efficiency of parabolic dish.

Who can best use Solar Thermal Energy?

So, this is all sounds pretty compelling. But, what kinds of customers can best utilize solar thermal, and specifically the FOCUS, to meet their energy needs? Generally, we have found that where an organization meets the following criteria, solar thermal will be a compelling proposition:

1. Has a continuous, year-round need for heat energy. The ideal case is where a company is running a continuous process, seven days per week, year-round, and can therefore easily consume any energy produced by the solar thermal energy (STE) plant. If the consumption is only seasonal, or only a few days per week, the STE plant will be under-utilized, and energy will go not be utilized. As such, the effective price per unit of energy will be higher.

2. Is located in an area with a significant amount of direct normal irradiance (clear skies). All CSP technologies require clear skies to perform. Under cloud cover, it is not possible to concentrate a significant amount of solar energy. Thus, STE plants located in a region such as the U.S. Southwest will be more productive than elsewhere with less clear days. Ideally, DNI of at least 4 kWh/m2/day is available. DNI availability for any location can be found using our CASPER tool, here.

3. Pays a sufficiently high energy price for energy today. STE plants will likely be offsetting consumption of natural gas, fuel oil, or other fuel. Therefore, the higher the price of natural gas, fuel oil, or other fuels, currently paid by the client, the higher the value of the energy generated by the STE plant. In the U.S., with the available tax incentives, this can be as low as $7/MMBtu ($24/MWh), or less, even in an area with limited solar availability.

4. Has adequate space adjacent to site to host a solar installation. Since solar is a diffuse resource, collecting meaningful amounts of solar energy requires a significant amount of space. A single acre (4,000m2) can host approximately 70 FOCUS units, with ~2MW thermal capacity. This is more output per acre than any other solar technology.

5. Takes a long-term view of operations / energy prices. Buying any renewable energy generation solution is a long-term commitment, equivalent to entering into a contract to buy energy at a fixed price over time. Typically, we model our projects as having a 25 year life.

6. In the United States, has a federal tax expense. In the U.S. there are very significant tax benefits to adopting renewable energy technologies, including the investment tax credit (ITC), and accelerated depreciation, plus bonus depreciation. However, a company must have a U.S. federal tax expense to qualify for these incentives. For solar thermal energy projects which commence construction in 2022, the 26% ITC is available – that’s a full 26% off the entire project cost! Then, with accelerated depreciation, the full project cost, less ½ of the ITC amount, can be expensed. From 2023 onwards, the ITC and bonus depreciation benefits begin to taper, though there is a push to extend them.

This set of criteria has been arrived at following many discussions with potential clients, and the prospective clients we are in the most advanced talks with meet these criteria.

An Example Project in the United States – ACME Brewing

ACME Brewing is a popular brewer of beer, with two plants located in the United States – one in Riverside, California, and the other in Reading, Pennsylvania. Due to the high demand for beer, ACME runs both plants continuously, year-round. Making beer requires a continuous supply of heat, for cooking. ACME consumes 30,000 MMBtu of natural gas each year at each plant. ACME runs daytime shifts, 7 days per week. ACME pays $10.26/MMBtu ($35/MWh) in both locations. Additionally, ACME would like to cut its CO2 emissions, if possible. ACME’s sites both have approx. one acre of unused land adjacent to the plants, which could be used to host FOCUS units. Finally, ACME, as an established business, has achieved profitability and has a federal tax expense which can be offset using the investment tax credit and accelerated depreciation.

One acre of land can host 70 FOCUS concentrators, which works out to ~2MW of peak thermal capacity (each FOCUS unit has approx. 28 kW of peak thermal capacity). However, over time, the actual MWh output will vary based on location, driven primarily by the amount of cloud cover at the location. In Riverside, CA, according to our CASPER tool (which uses NASA data), average solar availability, or direct normal irradiance (DNI), is estimated at 6.8 kWh/m2/day. However, in Reading, PA, average solar availability is only 4.0 kWh/m2/day (below that of most regions in the U.S.). The energy output of the STE array at each plant is shown below.

Thus, simplistically speaking, the 70 units could meet approx. 50% of the Riverside plant’s 30,000 MMBtu/yr consumption, and approx. 30% of the Reading plant’s identical requirement, with the difference being due entirely to the delta in DNI between the two sites. Clearly, the significantly higher energy output in Riverside dramatically improves the economics of the STE project there, vs. the Reading project.

Additionally, each project is assumed to commence construction during 2022, and go into service in 2023. Thus, each project is eligible for the full 26% investment tax credit. This is a dollar-for-dollar reduction in the federal tax expense. Additionally, each project is eligible for accelerated depreciation and bonus depreciation. Thus, ACME Brewing can expense 87% of the $2.6M project cost, or $2.3M. 80% of that amount can be expensed in year 1, as bonus depreciation, with a portion of the remaining 20% also expensible in year 1. Furthermore, the project operating costs and financing costs will produce an additional tax shield (assumes that interest is tax deductible and the client is not subject to the section 163(j) limitation). Assuming a 21% federal tax rate, this results in a significant reduction in federal tax expense in year 1. With these assumptions, overall project cashflows for each plant are provided below.

Net annual cashflows to ACME Brewing from the Reading STE plant project over its 25 year life are shown in the chart below. Due to the ITC and accelerated depreciation, the Reading project significantly positively impacts ACME Brewing's cashflows during year 1. This is followed by a period of debt paydown (years 2-10), and then a harvest period after that (years 11-25). The overall net positive cashflow to ACME Brewing amounts to approximately $600K.

Net annual cashflows to ACME Brewing from the Riverside STE plant project over its 25 year life are shown in the chart below. As with the Reading project, the Riverside project significantly positively impacts ACME Brewing's cashflows during year 1. Similarly, this is followed by a period of debt paydown (years 2-10), and then a harvest period after that (years 11-25). However, because of the much higher DNI in Riverside, the overall net positive cashflow to ACME Brewing is much higher than in Reading, amounting to approximately $2.7M.

With reasonable assumptions, deploying the FOCUS for solar thermal energy can be a highly cashflow positive project for U.S. companies meeting the criteria outlined above, even in regions with lower solar availability such as the mid-Atlantic. Indeed, as shown on the map below, the majority of the U.S. has DNI in excess the 4.0 kWh/m2/day available in Reading, PA. 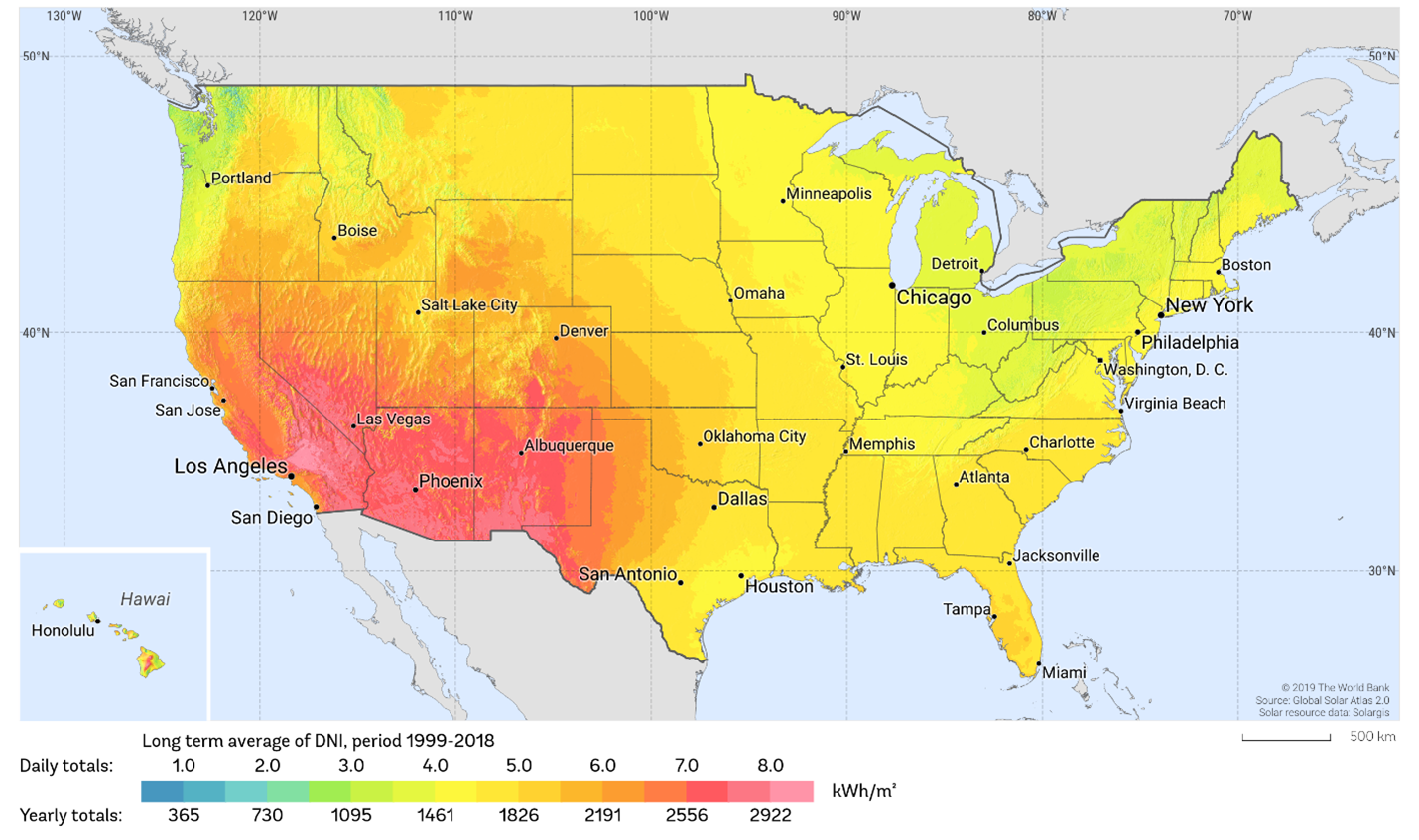 Please reach out to the Solarflux team if you think you meet the criteria outlined above, and/or are in learning more about how the FOCUS might be used at your company. We'd be happy to provide a complementary cashflow analysis.