In an effort to help the country reach its 2050 decarbonization goals (1), we are proud to announce the launch of CASPER, a web-based tool to compare the energy collection and conversion efficiency of the Solarflux FOCUS parabolic dish concentrator with the most widely used alternative concentrating solar power (“CSP”) technology - parabolic trough. By understanding and comparing the performance of the FOCUS with parabolic trough, users will gain a rich perspective of the possibilities of solar thermal energy and which alternative works for them based on their location.

CASPER utilizes a NASA DNI database (2) to infer performance at a given location for both the FOCUS, which has field demonstrated peak solar-to-thermal efficiency (“peak efficiency”) of 72% (3), and a high performing parabolic trough with an assumed peak efficiency of 70%, and then charts the data on a monthly basis for a year, calculating the relative energy output for each technology. The comparison is done assuming equal reflective mirror area for each technology. Claimed parabolic trough peak efficiency percentages can range anywhere from mid-50s (4) to low 70s (5), though these measurements are typically under lab rather than field conditions.

The biggest single reason for this performance differential is that the FOCUS uses a two-axis tracking system, whereas parabolic troughs use single-axis tracking. This means the FOCUS is always perfectly aligned with the sun, from sunrise to sunset, allowing optimal exposure of its reflective area. Further, as latitude increases, the advantage of two-axis tracking systems over single-axis tracking systems becomes more pronounced. This is illustrated in Figure 1 below, which compares the annual average efficiency of the FOCUS vs. trough across a year for Barcelona, Spain (top chart, latitude 41.4) and Aruba (bottom chart, latitude 12.5). As shown, the FOCUS outperforms trough by 53% in Barcelona, but only 10% in Aruba, with most of the outperformance in the winter months. 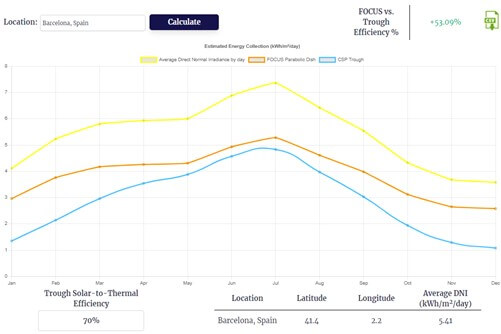 The overall performance of the FOCUS relative to trough by latitude is shown in figure 2 below. As latitude rises, the FOCUS delivers ever higher outperformance. For example, in Ulaanbataar, Mongolia (latitude 47.9 degrees), the FOCUS outperforms trough by a whopping 80%! 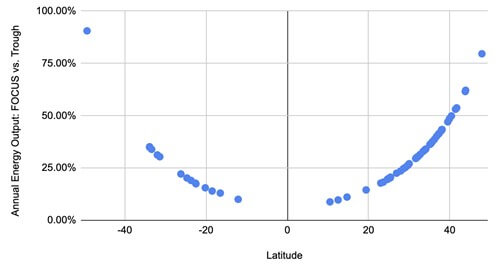 Broadly speaking, the highest potential regions for concentrating solar power tend to fall between latitudes of 20 and 40 degrees north and south of the equator. Within this zone, the FOCUS will outperform an equivalently sized high performing 70% peak- solar-to-thermal efficiency trough by between 15% and 50%, depending on latitude. For lower performing troughs, outperformance will obviously be even higher. It is therefore no surprise that parabolic dishes such as FOCUS are widely accepted to be the most efficient concentrating solar power technology (6). 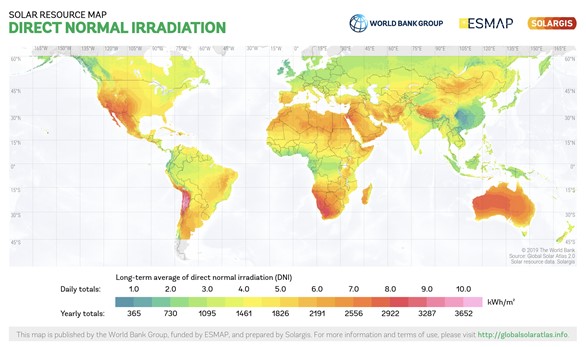 The FOCUS achieves this higher relative performance using low-cost aluminum mirrors, steel castings, and highly reliable, commercially available parts coupled with a proprietary, patented optical design. Mast-mounted, the FOCUS can be installed on unprepared or sloped ground and even building rooftops. The FOCUS is designed to operate under rugged field conditions with minimal maintenance. Due to its highly recyclable all-metal construction, the FOCUS presents no electronic waste or end-of-life challenges, unlike other solar energy technologies. Because the FOCUS delivers more energy per unit of reflective area, it makes better use of the space devoted to hosting the equipment. For all these reasons, we believe the FOCUS to be the most flexibly deployable and cost-effective solar energy technology available.

More information about CASPER or the FOCUS please feel free to contact us at contact@solarflux.co, or visit our website at www.solarflux.co.

1. “On Day One, President Biden fulfilled his promise to rejoin the Paris Agreement and set a course for the United States to tackle the climate crisis at home and abroad, reaching net zero emissions economy-wide by no later than 2050” https://www.whitehouse.gov/briefing-room/statements-releases/2021/04/22/fact-sheet-president-biden-sets-2030-greenhouse-gas-pollution-reduction-target-aimed-at-creating-good-paying-union-jobs-and-securing-u-s-leadership-on-clean-energy-technologies

6. “Parabolic dishes are commonly accepted as the most efficient concentrating solar power (CSP) technology for the conversion of solar energy into electric or chemical energy. For this reason, the promise of dish concentrators has long been recognized.” – Dish Systems for CSP, Joe Coventry, and Charles Andraka, https://www.osti.gov/servlets/purl/1356835.